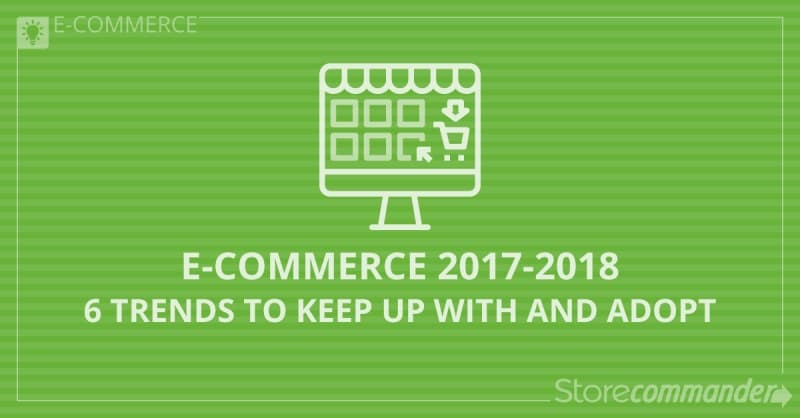 It’s been 10 years now since we’ve been announcing our annual ‘record year’! In a few days’ time, we’ll know the e-commerce figures for 2017 and there’s no doubt that we’ll have remarkable results again. This strong performance is in fact the result of consumers’ insatiable appetite for online services but also very much the result of a profound digital transition among stakeholders.

The first thing to note in 2017 and which will go from strength to strength in 2018 is that commercial promotions attracted web surfers in great numbers. This is attested by Black Friday (on 24 November 2017) which was a historic success. For leading players in e-commerce, results were on the agenda: at PriceMinister, for instance, turnover quadrupled for the day.

In this same context, on 11 November China celebrated Singles’ Day, with AliBaba announcing $24 billion in sales for this day alone!

In the United States, the figures are conclusive: Amazon represents 4% of commerce and 44% of e-commerce! Those who thought a few years ago that e-commerce would remain marginal, have clearly had to change their perspective. These same people were talking about the fragility of the commercial giant, not understanding its investment strategy. Today, it’s safe to say that the gamble has paid off for Jef Bezos and his team.

In France, too, results are consistently good for leaders. Cnova, the parent company of Cdiscount, and the e-commerce branch of Casino, announced in a press release increased turnover of over 9% in 2017.

Leaders’ growth is based on the natural development of the e-commerce market, whose posted growth rate has been in double figures for the past few years. Besides the organic growth of company sales and acquisitions, these merchants also develop marketplaces allowing them to capture a large share of the added value of other e-merchants displaying their catalogues there: in 2017, 50% of online sales were in these marketplaces, with Amazon and Alibaba leading the way.

Even if it did not invent the notion of “cross-channel” sales, the internet has enabled everyone to play a part. This technique relied on the interconnection of the different marketing channels used by the company. The concept of “omni-channel” sales appeared later and emphasises the consumer’s journey rather than the channel.

Today, the quality of service experienced by consumers involves the company being present everywhere. A study by Criteo shows that “multi-terminal” purchases accounted for 45% of transactions in 2016-2017. Marketing has to reflect a customer’s journey when he wants to change devices, search for information on his office computer then show the product to his spouse on his mobile, and then finalise his purchase on a tablet.

If we look in more detail at the figures published by Criteo, we discover that these “user-centric” journeys have a customer conversion rate which is 1.4 times higher than with campaigns centred on a terminal.

The term “click and mortar,” conceived in the 1990s, is now obsolete but never before has it been such a living reality. You could even say a revolution is underway on both sides, involving physical establishments and companies from the web.

In June 2017, Amazon’s e-commerce leader announced the acquisition of the Whole Foods Market chain for $13.7 billion, taking control of the chain of 460 leading organic food stores in the United States. As for Walmart, it has bought several e-commerce sites (jet.com, Shoebuy, ModCloth, Moosejaw and Bonobos etc.), bolstering its positioning as an e-merchant. But as the world’s leading traditional retailer (with 2.2 million employees), Walmart is also investing in the large-scale “web-to-store” and has announced it will build 1,000 additional drive warehouses by 2019.

On a lesser scale, in France, Spartoo has just taken over the André Group, investing €15 million and exploiting web convergence and distribution. According to Spartoo founder Boris Saragaglia, “On the internet, people mainly look for convenience and a price component. In shops, there is a real relationship with retailers, you can touch products, and it’s a more enjoyable experience”.

67% of web users access the internet with a mobile. In 2017, many sites – particularly in e-commerce – saw over 50% of visits from smartphones. This “switchover” in behaviour speaks volumes about the future of online sales. But, for now, it remains an unknown: how can you turn this traffic into purchases? Indeed, customer conversion rates on mobile phones is 10 times lower than that of mobile visits. It is therefore crucial to analyse the actual positioning of mobiles in purchasing processes to adapt the offers on these devices.

The second mobile revolution that is emerging is mobile payment. Today, three major players share the market: Apple Pay (86 million users), Samsung Pay (34 million users) and Android Pay (24 million users). This technology could be at the heart of information systems in terms of the omni-channel strategy.